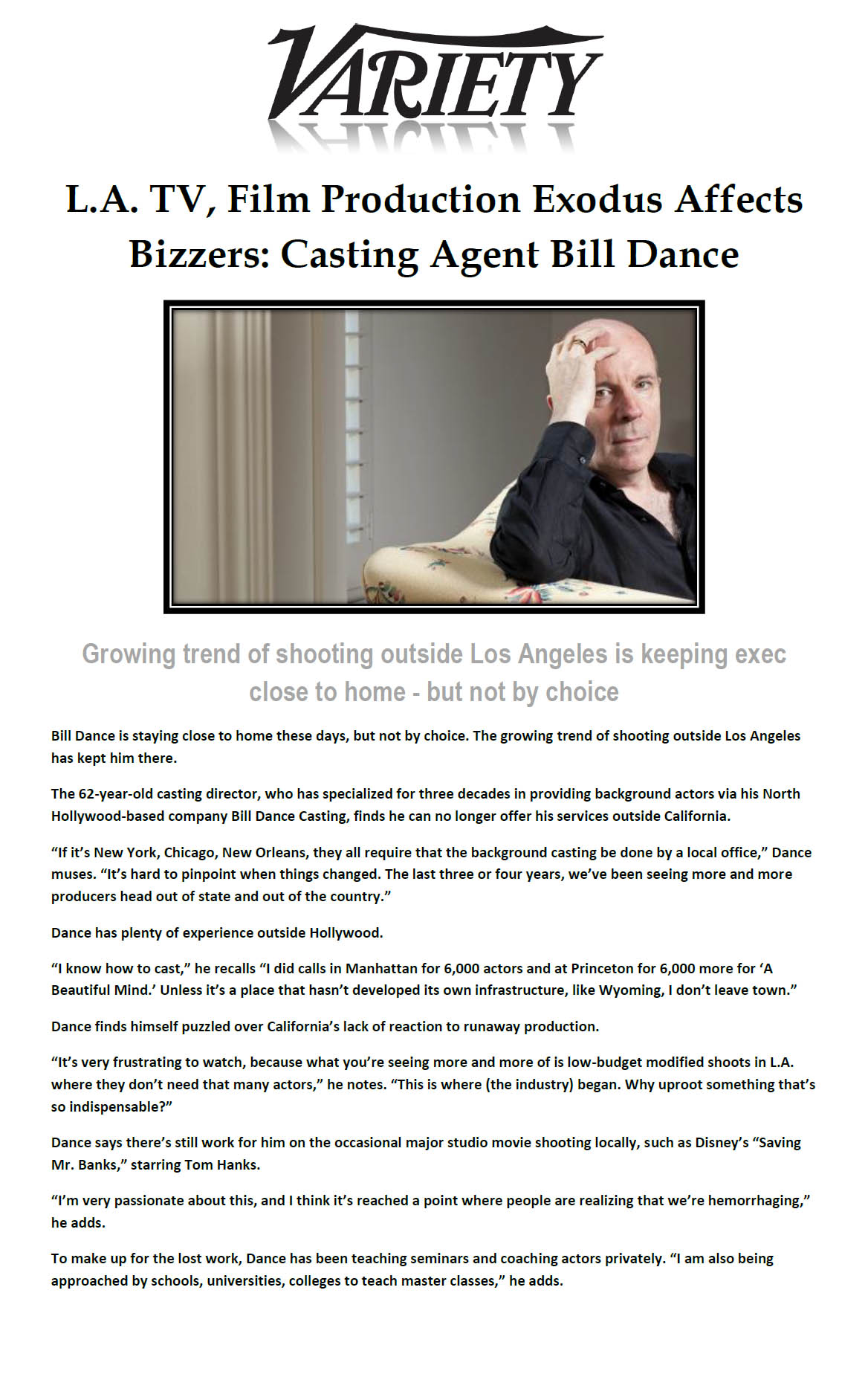 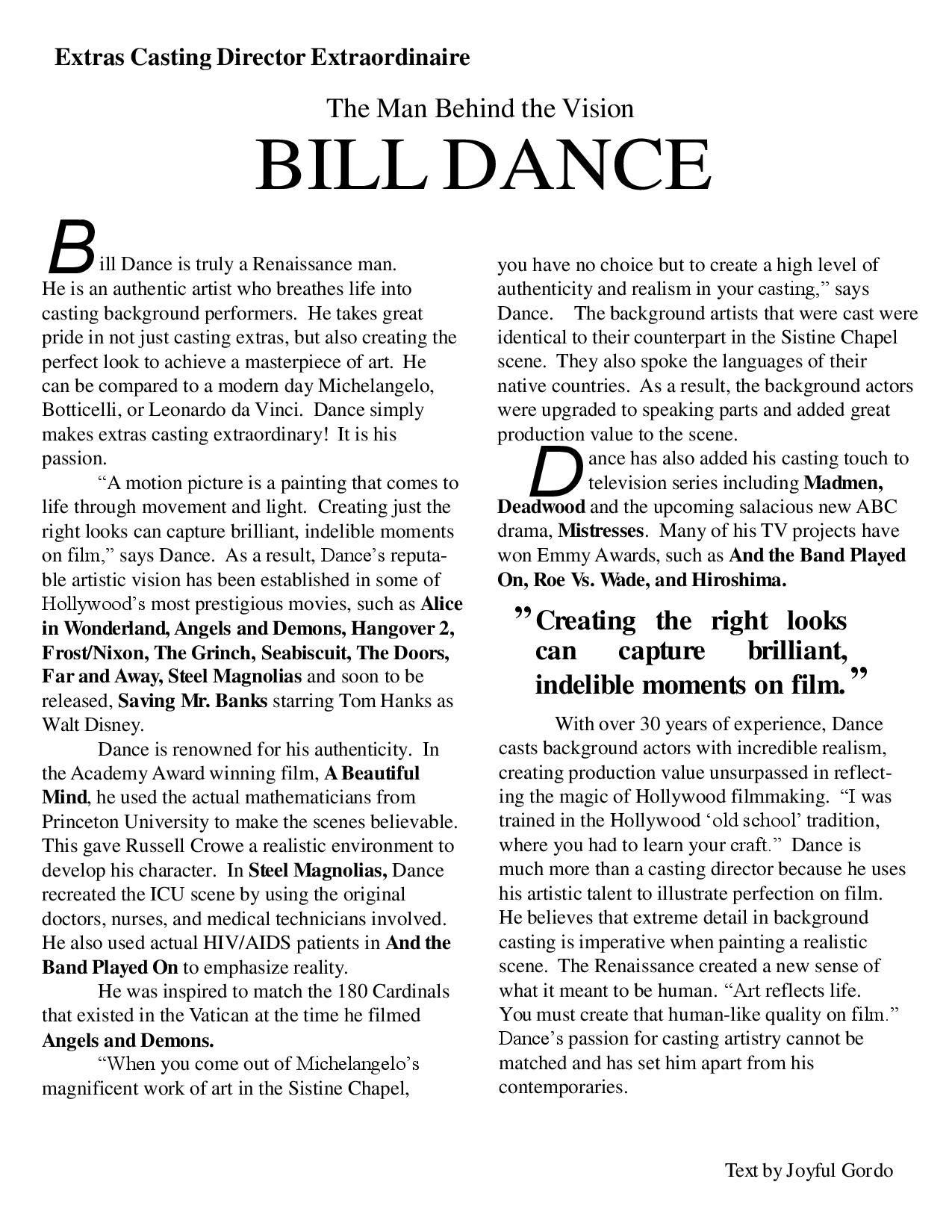 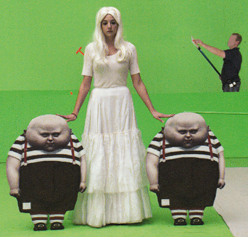 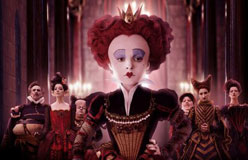 Helena Bonham Carter as the Red Queen with her court.

North Hollywood, CA– April 4, 2011 (HPR); Each time the phone rings at Bill Dance Casting, the potential to help mold Hollywood history presents itself just as it did back in March of 2009 when a member of Director, Tim Burton’s staff called to hire three hundred pale-faced actors for the Red and White Queens’ courts in Burton’s Academy Award-winning feature, Alice in Wonderland. In a surprising twist during post-production, Burton opted to add human elements to the background of his predominately CGI scenes. Dance applauded Burton’s decision and offered further support, “Real people just breathe more life and energy into the scene, and realism has more reaction and movement than digitizing. Once he (Burton) made his decision, we went in search of actors who fit the period.”

Bill Dance Casting was part of a highly acclaimed team of production icons that included Academy Award winners Production Designer, Robert Stromberg and Costume Designer, Colleen Atwood who together transcended the Victorian era into the mystically dark world of Wonderland. White Queen Stand-in, Britt Hysen remembered being on the set, “The art direction and production design was fascinating. Even with all the green screens, the White Queen’s kitchen was my favorite set because of the whimsical environment and zany props.”

Dance described his involvement as “sculpting the scene” to fit within the concept of the designers. The idea was to make the crowd as homogenous as possible within clothing and environment, yet still portray the qualities associated with high class Victorian society. “The White Court’s ensemble required fair-skinned blondes with light colored eyes and natural hair, and older men with long, white beards to blend into the bright and cheerful essence of the White Queen’s castle,” Dance said. “The Red Court needed jewel tones, blacks, browns, and deep reds to accentuate the malicious acts of the Red Queen.” He noted his close attention to the facial features of every background actor to compliment Stromberg’s and Atwood’s designs. Hysen commented on Dance’s attention to detail, “Each person added such a majestic and regal appearance. It was particularly remarkable to see how well the faces fit the costumes and period.”

Having worked closely with Colleen Atwood on numerous films during his thirty-year casting career, Dance credited her as a ‘master in her craft’. “From the colors to the material, she’s constantly thinking ‘do these clothes compliment the production design?’ Then I try to make her work easier by giving an accurate prototype to dress,” he stated. When working on period pieces, the casting staff researches history to authentically match the background actor with the costumes and environment. In doing so, Bill Dance Casting presents the production design team with hundreds of pictures of hand-picked background actors, creating palettes of personalities that flatter each scene. “As a true artist,” Dance explained, “Colleen’s unique style comes through her innate ability to go inside the character and reveal an identity through clothing.” Dance takes great pleasure in providing the perfect face and body type to fulfill her vision. Hysen added, “The costumes were incredible – one of the most flavorful aspects of the set. Each person wore something unique that embellished their character.”

When Dance visited the Alice in Wonderland set during a White Queen court scene, his senses were indulged. “Everything was so harmonious. You could feel the textures of the patterns just by looking at them. Even though you had to use your imagination to fill in the rest of the set, the production design flowed so nicely with the people and costumes.”

The choice to switch from animation to live action proved fortuitous for Burton when Atwood and Stromberg both took home the Academy Award in February for their work on Alice. “In order for a production to radiate creative unity, every person must work together for the betterment of each scene,” Dance stated. “Costume design, production design, and casting are all facets of movie-making that breathe life into the story and generate relatable experiences for the audience.” 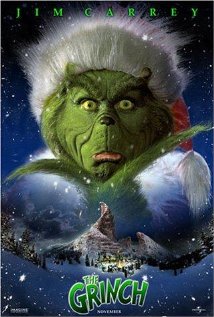 The Creative Process of How the Extras Were Cast in Dr. Suess’ Whoville. 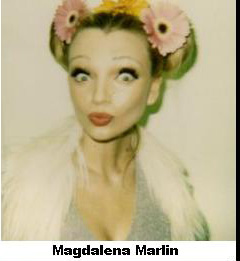 A WHOLE LOT OF WHO-EY GOING ON! THE CITIZENS OF WHOVILLE AND THEIR SELECTION FOR THE FILM, HOW THE GRINCH STOLE CHRISTMAS, 2000.

The amazing creative collaboration of how the extras were cast in How The Grinch Stole Christmas, was quite unique and very selective. Casting the right faces and body types to enhance the “right look” of the Seussian characters were essential in selecting these characters. As a part of the audition process each extra was asked to create a whimsical character in Whoville. Each person had to create a biography of who they were in Whoville. They also had to do their own make-up, hair, and design their own costume for the test. Each actor did an improvisation internalizing their character as well as doing their specific artistic performance.

Many actually wrote and spoke in the rhyming-language of Dr. Suess. We videotaped every extra as a part of the audition. The physical range of types was vast. At the end of the every improvisation, I pretended to be the Grinch- scaring them to death.  The reactions were startling. (We laughed hysterically off camera.)  By videotaping the auditioners, we were able to show their extreme talent range as well as to see how they photographed. 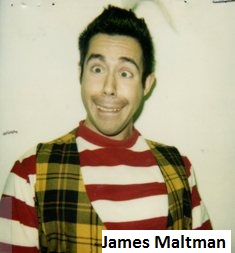 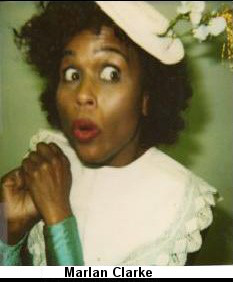 The silence of their Charlie Chaplain/BusterKeatonesque performances created the soul of Whoville.  Also, the extreme attention to detail in casting the right physical types was crucial for Rick Baker @ Cinovation, who won an Academy Award for designing the prosthetic make-up. The physiognomy of the extras’ faces was an essential part of how Rick’s make-up design was created. We were looking for large eyes – compact features within the eyes, nose, and mouth areas. Each Who had several screen tests and make-up tests before actually being cast in the film. This was to make sure they had that half-human, half-animal, yet gentle carefree quality of a Who, come through on film. 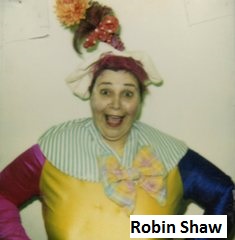 In terms of wardrobe, choosing the right body types was essential to the characters in Whoville. Not too skinny, not too tall, not flat, but pear-shaped. Terms like Who-Whopla, a full hearted silliness, cute, bright whimsical, and yet always on the verge of total terror when the Grinch appeared. This Whoiness required the performers to have their emotions right at the surface, yet with the depth of their own soul showing through their eyes and body movements. 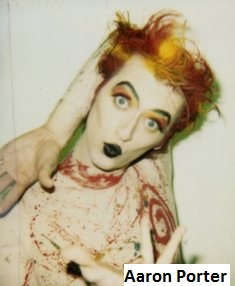 The professional clowns cast in the movie were exceptionally thrilled, as Dr.Suess had been their personal idol, hero, visual genius and mentor throughout their entire lives, and considered themselves in a dream come true while filming the Grinch. “Every day was Christmas, and a wacky one at that.”  Since this was a live-action film, the Who’s uniqueness created the heart beat of the town of Whoville. The expressions of the characters in Whoville enhances one’s soul allowing you to experience not only the artistic brilliance of Dr.Suess, but How the Grinch Stole Christmas.